A few years back, when we were up visiting my brother and his family, Dave and Jason decided they needed to build a couple of potato canons.  They spent the morning viewing how-to videos, as well as examples of various different potato canon models, on YouTube then headed over to Home Depot to buy their supplies.  By late afternoon each family had their own potato canon and we all went out onto their back deck to test them out. None of us had anticipated just how loud or how far they would shoot! Fortunately, we didn’t take out any windows on the other side of the neighborhood.  As far as we know.

Dave fills the chamber in the back with hairspray

clearly they were not expecting the “BA-BOOM!” that followed

We were hooked from that point on and the firing-of-the-potato-canon has become a tradition at all important family events forever after.  Somehow however, we’ve continuously forgotten to bring it with us every time we’ve gone down to the lake… until this past weekend that is.

Somehow it doesn’t sound nearly as loud when you shoot it in a wide open space as when we have shot it at home!

Dave loads a potato into the front end of the canon while Jared, Matthew and Max look on

Our fun was cut short when one of the neighbors came out to go fishing. No worries though, we had all had a few chances to see how far across the lake we could shoot, so we packed up the potato canon and ammo and headed up to Waffles Ridge to make Hobo Pies.

We discovered these single serve wine bottles at the Valero gas station/fas-mart on the way to the lake and decided we must try them!

although more of a fan of full bodied reds, I opted for the sweet Muscato… seemed like that would pair better with our hobo taste treats

and of course the old standby, nutella and marshmallow

Jared prepares his pie for toasting

Having sufficiently stuffed ourselves, it was time for a little target practice…

Dan and Kris ride over on the ATV

Jared and Dave pick out their ammo

Matthew and Max take a screen time break, laughing over some video Max has found

Dan wastes no time and is first to shoot

Dave teaches Laura how to shoot the .357

a little more spread out than usual, but I’ll take it

Matthew starts out with the .22

then tries the .357…we loaded .38 specials in it so it would have less kick to start with

Jared tries it out next with a .357 round

Dan and Dave have a shoot off with the .22s

Laura comforts her baby, Beemer, who is not overly excited about the noise

After everyone had had their fill of shooting targets, we went back over to the lake for bit.

Kris watches over Sophia as she climbs the rocks

Sophia stops to pose for a photo

then takes the ATV for a spin

Dan takes Sophia for a turn

Jared checks to make sure Beemer is okay after jumping off of Waffles Ridge… despite doing a face plant and roll when he hit the ground, he seems okay

Having had several hours of fun, it was now time to pack up and head out.  Although we had to say goodbye to the Clarke family, Laura and Jared decided to join us for a late lunch on our way out at our favorite Mexican restaurant, El Caporal. 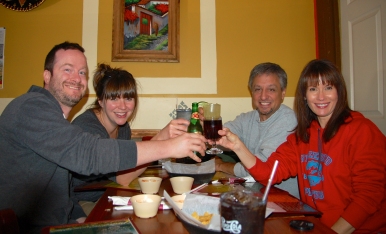 I handed the camera over to Max to take a quick photo of Jared, Laura, Dave and I as we share a toast

One more stop before heading home. We had yet to buy our fall pumpkins and the farmers market just happened to be right next to El Caporal….

Dave and Max check out the rotten pumpkins

this cute little building next to the farmers market is being renovated…not quite sure what it is, but it’s awfully cute

Max hamming it up for the camera

and now for a normal pose, thank you

After finding three practically perfect pumpkins, we headed back home, having had another fun-filled day and created many more lasting memories of perfect days spent at the coleman cabin.  Okay, so technically we don’t actually have the completed cabin yet, but still….