framing up the fireplace wall and hearth

Another crazy weekend, weather wise.  Saturday started with heavy fog that was just beginning to lift as we got to the lake.  It was already warm and humid out when we arrived and supposed to get up into the 70s, but not so inside the cabin.  As soon as we opened the front door, we were hit by an icy draft as the cold air from inside the cabin rushed out.

early morning fog on the lake

toward the afternoon, the heavy rain clouds rolled in

the sky got pretty angry looking just before the deluge began

Undeterred from the icy inside temps, Dave started up the generator, turned on the heater, and went to town building the fireplace wall.

Dave cuts the first boards for the fireplace wall

side walls go up

next, Dave makes a box out of 2x6s that will act as a cross beam to support the rock wall and future mantel

framing in the top of the wall

already 68 degrees outside, but so cold inside we could see our breath

Dave is hard at work while Max and I park ourselves in front of the heater. (In my defense, I injured my back last week while helping Dave move the ladder out on the roof so am out of commission till it heals. Boo.)

Fortunately, Dave’s pretty much a one man show and has no problem working on his own

outer frame complete, Dave realizes that if he moves the upper edges of the wall in a few inches, he will only need one full piece of plywood to cover it

he continues till the Roxul fills all the open spaces

and now we’re ready for the cover

once the OSB is placed, it’s easier to visualize what the finished fireplace will look like

now to frame the hearth

a sheet of Duraroc is placed ontop

and, we’re ready for the stone!

And, incase you were wondering what our place looks like from above, Todd Hawkes just sent us this photo… Thanks Todd!!! 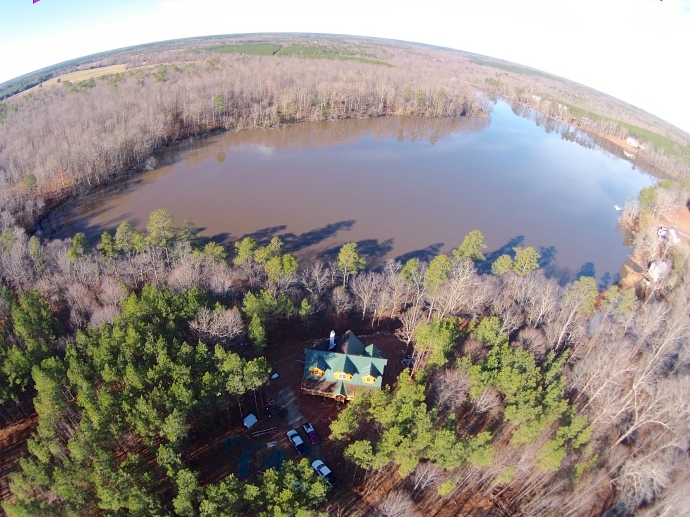 The Coleman Cabin and Colemans Lake as seen from above