enter Kenneth Lipham and his band of log craftsmen…

Posted on November 4, 2013 by the coleman cabin

Having resigned ourselves to the fact that nothing more was going to happen with the cabin till November 11, we were rather surprised to get a phone call last Tuesday night from Kenneth Lipham, informing us that he would be arriving in town Wednesday morning, followed shortly thereafter by his building crew, and that they would begin construction on our cabin at dawn Thursday morning.  We were completely taken off guard (to say the least!) but made arrangements to drive down and meet him at the lake Wednesday afternoon.  We arrived to find him already on site along with his furry little sidekick, Bingo.  It seems that, since Battle Creek’s regular building teams were so far behind, they had called in Mr. Lipham and his team, who contract out to several different Log Home companies across the country, to see if he could step in and build our home. After talking with him for two and a half hours, we left with the feeling that we were completely in good hands and actually fortunate that he would be handling our construction rather than the originally planned team. He informed us that his crew would work from dawn till dusk, seven days a week (with a 30 minute break taken on Sundays for a church service),  and that they would be finished in 15 days rather than the five weeks that we had originally been told it would take to have us dried in!!! 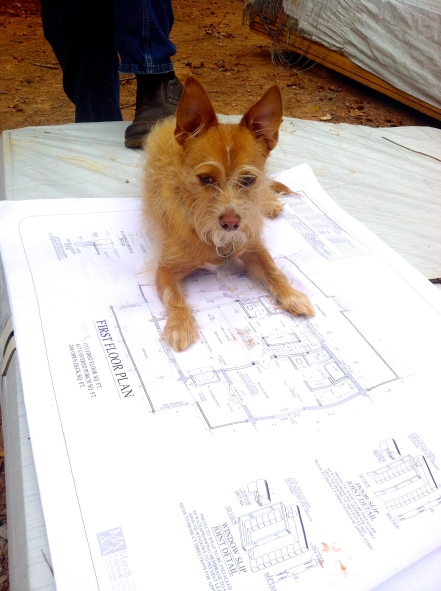 Bingo checks out our floor plan

fall has returned to Colemans Lake

a beautiful setting for the first day of construction

our view as we walk up to the work site

After a brief blessing is said, construction begins!

marking the ledger boards for drilling

balance, it’s all about balance!

Bingo’s job is to check every pile of wood for snakes and varmints.

Onto the floor joists

Though our kit included everything needed to build our cabin from the first floor up,  we are responsible for suppling the support posts for the basement as well as the materials for the stairs leading from the first floor to the basement.  After watching the construction for a couple of hours, Dave and I took off to Home Depot in Petersburg to rent a truck and pick up the supplies the crew would need.

By the end of the first day, the stairwell and the supporting structure for the first floor was complete and the first row of floor boards were in place.

at noon, Mr. Lipham opened up his tailgate and made lunch for the crew

after a quick lunch break, it was back to work

Onto the floor joists

electric and compressed air for the crew

the trees are on fire

half way to a floor

the posts we just brought are installed

10/31/13- Mr. Lipham and Bingo supervise the placement of the basement supports posts

easy!!!! I think that’s about as far as you can go

OK, glue it and screw it.

at the end of day 1, they had already begun to place the floor!